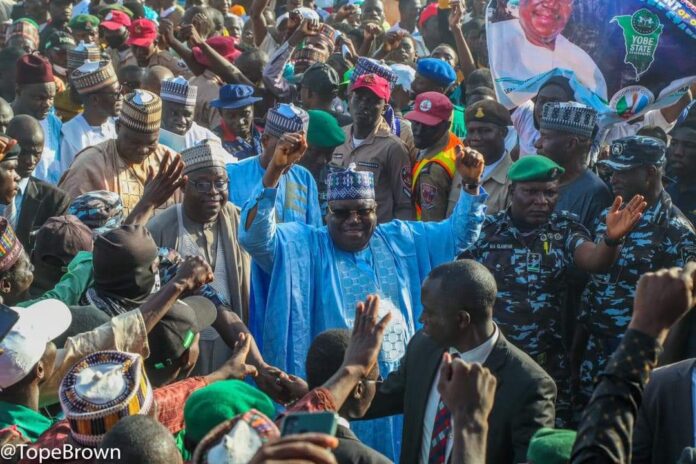 Saturday, 3rd September, 2022 was historic in Yobe State and a day to remember for the people of the state and their guests. The atmosphere was ecstatic as a mammoth crowd gathered at a reception held in Gashua by the state government in honour of one of the great sons of the state, Ahmad Ibrahim Lawan, the distinguished Senator representing Yobe North Senatorial District and 14th President of the Senate of the Federal Republic of Nigeria.

It was a carnival of some sort. Right from the outskirts of the town, security officials had a hectic day controlling the surging crowd eager to get a glimpse of Lawan making a triumphant entry like an ancient warrior returning from a successful heroic exploit.

As part of the grand reception, an ultra-modern market built in Gashua by the Governor Mai Mala Buni administration was also commissioned. The state government named the facility after Lawan.

It was easy to mistake the event for a campaign rally of a very popular candidate. But that was not the case at all because INEC is yet to blow the whistle for the start of the campaigns.

Why Ahmad Lawan? What precisely has he done to deserve such honour? What did his people see in him to deserve such monumental fanfare? Why would Governor Mai Mala Buni commit state resources to honour a Senator?

The answers are not far fetched for minds familiar with the state. All through his public life, Ahmad Lawan has been a worthy ambassador of Yobe State. Some people watching from a distance may not know that he is from a minority ethnic group in Yobe. Yet, he has effectively represented his people at the National Assembly right from the commencement of the Fourth Republic in 1999.

Indeed, the Saturday event pulled people together from across ethnic and religious lines. For example, the Ohanaeze Ndigbo resident in Yobe were well represented at the reception. The group delivered a plaque to the Senate President as well as Governor Buni. Just to say thank you.

It was also probably to reciprocate Lawan’s unflinching support for Governor Buni, who he often calls his “brother and friend.” And as speaker after speaker said at the event, it was an honour and recognition Lawan well deserves.

Governor Mai Mala Buni described Lawan as “an excellent ambassador, uncommon parliamentarian and a pride of our dear state” and explained why his government decided to honour him.

“It is imperative for us as a society to always appreciate and celebrate those who have improved the lives of our people. I believe that such recognition will spur them to do more to add to the lives of Nigerians and humanity generally.

“It is with utmost gratitude that the Senate President ensured that Yobe State is never shortchanged, having missed out for 16 long years under the PDP administration.”

The governor reeled out a few of the tangibles which the “uncommon parliamentarian” has attracted to the state:

“Among some of his numerous contributions to Yobe State, the Northeast sub-region and Nigeria are his pivotal roles in the approval of the new railway line from Port Harcourt to Maiduguri via Damaturu and Gashua, Damaturu Regional Water Supply, the reconstruction of Wachakal Airport, the Fika Water Project, the upgrading of 132 KVA power line, the ongoing upgrade of Geidam, Gashua and Nguru power substations.

“This is in addition to the numerous roads, electrification and medical facilities that he secured to the state, as well as Federal Government appointments he also secured for many people, and many others too numerous to mention.”

In his response, the man of the moment, the Sardaunan Bade, Senator Ahmad Lawan, returned all the accolades to his constituents, the people of Yobe North Senatorial District:

“It is not about me. You made it possible. If you didn’t elect me in 2019, I wouldn’t have been Senate President. I appreciate the support over all these years, and I want to promise you that so long as we remain engaged with the federal government, we will have the best of treatment.”