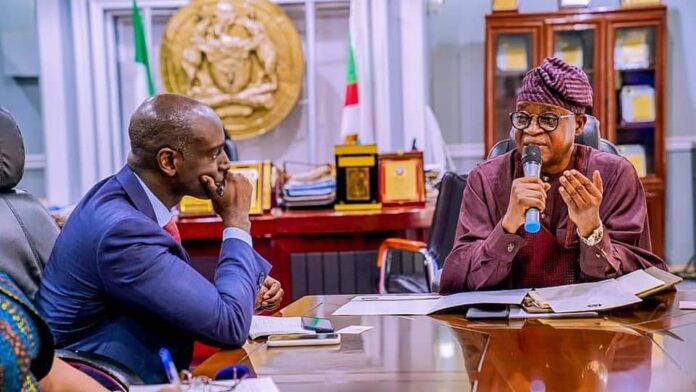 The government of United States of America on Wednesday expressed readiness to partner with Osun Government to deliver credible election during the July 16 2022 guber poll.

The US government delegation which was led by US Embassy Political and Economic Chief, Mr. Brandon Hudspeth, made this promise when they paid a courtesy visit to Governor Adegboyega Oyetola at the Governor’s Office, Osogbo.

Hudspeth informed the governor that they will be meeting election stakeholders in the State ahead of 2022 gubernatorial poll.

Responding, Governor Oyetola assured that Osun State election would set the pace for the general election in 2023.

He boasted that APC remains the party to beat, just as he remains the candidate to beat during the 2022 governorship election in the State.

He said, “I remember in 2018 we received delegation from the US that wanted to know the programme we had for the people ahead of election and we were able to meet the expectations of the US and other missions that are interested in our democracy.

“I want to tell you that we are looking forward to a credible election in Osun state. We are the party to beat, I am the candidate to beat anytime any day. The fact speaks for itself.

“So far so good, we make policies to make Osun the best in the country. We have done very well in the area of health, infrastructure, economy, education, youth empowerment and mining.

“We are trying to change the narrative of the state from a civil service state. We are looking at the area of Agriculture, Tourism and Mining. Although we have challenges in the area of mining because of environmental degradation, we are encouraging institutional miners from Australia, Canada and America too. We are naturally endowed in the area of mineral resources and we are looking for responsible partners.

“We’ve cared so much about the welfare of the people and ensuring their security. We pay salaries regularly. We pay pensions, we have fixed a number of roads and we revitalised 332 PHCs across the wards in the State. We have done peaceful congress and primary elections in the State. So, APC remains the party to beat anytime any day.”